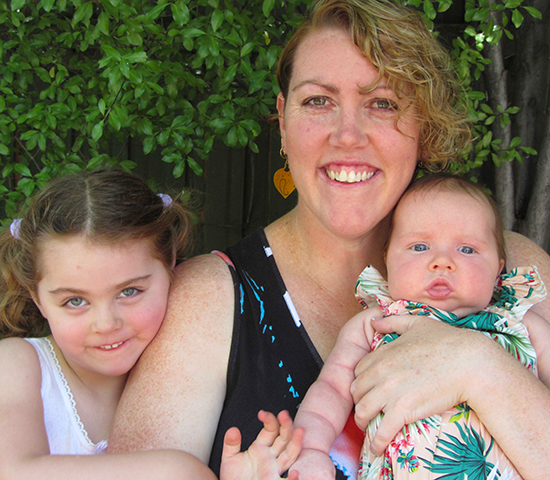 Hi, my name is Tarryn Holland and I have Pompe disease. Looking back I believe that I displayed symptoms of this disease from quite a young age, always falling over, not very good at any sports, always the centre of the jokes about how clumsy I was. However during my final year of high school in 1997 when I was 17 I decided to be a good Samaritan and donate blood, it was from this blood donation that I received a letter saying thanks for the donation, but no thanks – there was something wrong with the enzyme levels in my liver. This of course led to many tests.

For the next 12 months I had a blood test every fortnight, a liver biopsy & a small bowel biopsy all which led to me being told that the doctors did not know what was wrong and it was ‘just the way I was’. At this point there were no real noticeable symptoms (aside from my clumsiness) so I continued to go about my daily life.

Two years on whilst living in Germany I could no longer run and was starting to have a great deal of difficulty with getting up stairs. Returning to Australia at the end 2002 I immediately went to a Dr and was again told that they could find nothing wrong. By the beginning of 2005 I was very slow in my walking, could not walk far distances and could only get up stairs if I was bending forward and using my hands on each step again I went to the Dr and was told that at 88Kg “I was too fat” and if I lost weight I’d be fine. Being a young woman I took this to heart and went on a strict diet as obviously I could not exercise very well! I got down to 68kg and of course I was still having all the same problems.

I continued on with my life slowly getting worse, occasionally seeing different physios or doctors but no one ever picking anything up. It wasn’t until 2010 when I had severe back pain and my job as an early childhood educator was being affected as I could no longer get up off the floor easily or pick up the children that I went to see a chiropractor who finally recommended I go to my GP and get a referral to see a neurologist. Finally a breakthrough! From this point I again had numerous tests including EMGs, ECGs, MRIs, blood tests and finally an extremely painful muscle biopsy which required going under general anaesthetic and a large incision being made in my calf and led to not being able to walk properly for a month and an infection. From here though in December 2010 – 13 years after my first lot of testing I finally had a diagnosis! Perhaps not a diagnosis I was hoping for but a diagnosis none the less! Diagnosis or not, Pompe has had a large impact on my life over the years. It’s not only just the big things but the small things – things such as being a 32 year old woman and being terrified to join mothers group when you have had your first baby because you are not sure that you will be able to get in and out of the chairs at the centre where it is held and don’t know anyone well enough to ask for help. Not going out to dinner with close friends because they have chosen a restaurant that has toilets that are upstairs and too hard for you to access. Not being able to engage in any sport or recreational activity including something as simple as going for walk down to the local shop. Not being able to carry my baby around outside of my own house for fear of tripping on some slight incline or step and falling and hurting her. It really is the simple things for everyone else that start to become a major production for someone with Pompe. This of course does not only just affect me but also my family as we can never be spontaneous or do activities as a family together such as take walks, ride bikes or go to the beach.

It often feels that my rare disease is in control of me rather than the other way around, especially when I have to make decisions about my life based on my Pompe, decisions that lots of others take for granted. Things like can I continue to work in the job I love? Can I have children? Can I travel to visit my family interstate by myself? – The answer of which is no, particularly with small children. Pretty much every day brings a new discovery of something I can no longer do.

It is their unconditional love & patience that makes my bad days seem bearable. However, living with a rare disease is something that no one (except other patients) can understand. No matter how supportive family & friends may be one of the greatest supports you can have are other patients. Other people who get it. People who really understand what it is you go through on a daily basis, people who you can ask questions of and compare notes on how you feel without feeling embarrassed or judged. It is when connecting with these people I am thankful for modern technology as obviously having a rare disease does not always mean you have someone close by to talk to.

Looking forward to the future of living with a rare disease it is funny that my both my greatest fear and greatest hope are so closely linked – for me it is all about life & quality of life. The hope that my disease, with treatment, will not progress any further and I can enjoy the rest of my life watching my 2 beautiful girls grow into beautiful young women.

There is much that needs to be done to help people with rare diseases, particularly around raising awareness to the public and also medical professionals in order for early diagnosis and also correcting misdiagnosis to occur. Newborn screening is another aspect that would help in the early detection of Pompe disease. This is something I feel very passionate about as I feel that if I had been diagnosed even in 1997 when I was 17 and received treatment as soon as it became available perhaps my life would be very different today. I would hate to think that the same could happen to someone else, some young person at the beginning of their life, someone for whom it is not too late. Someone like my daughters.