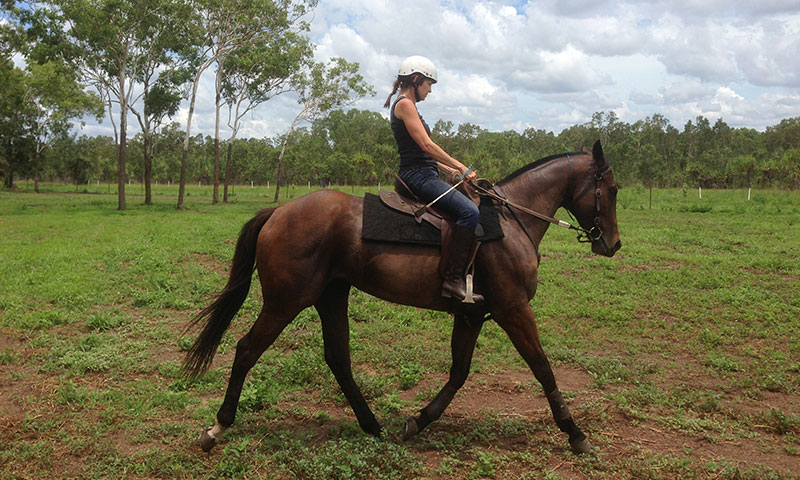 Those words were the catalyst, those words represented the change in direction that my life was about to take. All the events in my life that hadn’t been making sense, all the subtle changes that had been happening which I had been gently pushing to the back of my mind and living in a state of hope and denial, little did I know at the time how my life’s picture would play out.

My husband, noticing difficulty that he perceived I was having in maintaining my fitness and the more frequent horse falls that I was experiencing, even with my walking being expressed in my body’s movement. After many failed attempts of visiting my local GP to get him to look closer, my husband contacted a doctor friend of his in Bendigo which was around about 3,700km from where we lived and arranged an appointment for us to go on a trip. It didn’t take him long to confirm what my husband and I had silently been watching, there definitely were areas of concern in the test results which he gathered through the appointments, mainly my CK Enzyme Levels and Liver results were through the roof, I also had some digestion issues so the doctor’s first response was to set up an ultrasound, the results of which confirmed that I had gall bladder issues and that the gall bladder needed to be removed immediately.

“I felt like I was on a roller coaster, on the ride but not in control of the speed or direction”

I continued to work through this whole process, I am the Financial Controller of a large Civil Construction Company and had learnt to work in a pressurised environment so you can imagine my concern when one morning while at work I became ill and in fact collapsed resulting in me being rushed to hospital where the gall bladder surgeon met me and proceeded to evaluate all my symptoms, his evaluation was that the gall bladder produced its own specific symptoms and that what I was confronting was well above and beyond the potential consequences of a dysfunctional gall bladder. I was then introduced to another specialist who analysed my list of symptoms and requested a muscle biopsy as well as a multitude of different tests.

The time it has taken to get to this point seemed to go on forever, the mental anguish seemed unfathomable, your mind automatically goes on a journey of self-diagnosis, never ending “what if’s” and all sorts of distorted fears and insecurities. I had asked myself continually why it had taken me so long to try to diagnose or determine what was going on with my body.

Each one of us who finds themselves confronted with experiences that challenge our perception on life and the rules and expectations we each live with, will inevitably find ourselves chasing our thoughts, questioning our actions, challenging our choices or in simple terms trying to understand “Why”, “Why Me”, “What have I done to deserve this” and finding ourselves spiralling on a course of worse-case scenario considerations.

During my internal hindsight evaluation’s, I realised that I had had an accident which had camouflaged the real cause of my body’s deterioration and had allowed for me to live in a state of hope and denial. You see I love horses, and I’ve always loved horses and my love of horses led me to play a game called “Polocrosse”. This sport enabled me to combine my love of horses with my love of being extremely fit. You would possibly understand that of all things that a human being is able to do with a horse, falling under a horse, or having a horse fall on me was not one of the most uplifting experiences I’ve ever had. What I did experience as a result of this accident was the break in my pelvis in four different places. This fact was the very fact that allowed me to explain away to myself and everybody else why my walking and movement had become so difficult.

After around 12 months of visiting many different specialists and trying to find out what was wrong with me, I remember it was around 7pm in the evening, my husband Ray was still not home from work and I was still working from our home office when the phone rang, it was my specialist, he was going on holidays the following day and had gotten the results from my muscle biopsy and wanted to tell me before he left.

Now there was no warning for what came next, he started talking and out came the words “Myofibrillar Myopathy”, he asked me to go onto the computer and “Google the disease”. His information relating to this disease had been sourced from the same website that he had me reading from, he was reading to me directly from the website which he had obviously not studied when he came across and spoke the word “fatal” and then suddenly paused as he read t it, realising the meaning of the words just as he read them to me. He went onto say that it was not a good idea to pursue having children as there was a good chance that we could pass the disease on and then went on to say there was no “treatment or cure”. He then advised me that he was going on holidays tomorrow and he suggested that I make an appointment when he returned in a few weeks’ time. Within seconds and without any reassurance what so ever he was gone leaving me sitting in the room in total shock, I just sat there reading the website over and over in a state of complete of disbelief of the outcome of months and months of searching. I was overwhelmed and I cannot describe the depths of pain and anguish that I confronted that evening.

“As time went by I knew something wasn’t right, it’s a knowing, I can’t explain it, it’s a sixth sense”

This knowing was confirmed when I went to see a clairvoyant who without any word from me and without any prompting proceeded to inform me, “that I had seen a neurologist and if it were up to him he would have put me in a coffin and nailed down the lid” she then stated, “that she could see a blockage and that something wasn’t getting through”. She finished her statements by saying that I had been misdiagnosed. Now this had been approximately 2 years after my initial diagnosis and against all the other information and guidance that I had been currently obtaining. My diagnosis was not sitting comfortably with me, because my symptoms did not align with the apparent symptoms associated with my diagnosed disease.

We requested a re-diagnosis and contacted the Professor in Melbourne who had studied my muscle biopsy and nerve conduction tests and had gathered all the information and had concluded I was suffering from Myofibrillar Myopathy. The basis of our request was that the symptoms that I was suffering were at complete odds with the symptoms generated by a person suffering from my diagnosis. This was denied. The professor would not revisit her evaluation as she felt her first evaluation was correct. My husband then proceeded to get on the phone and informed this professor in no uncertain terms that he would take his wife to the Mayo Clinic in America and seek once and for all to get a diagnosis that explained all my symptoms and suffering. This was not our preferred choice, however we would not sit back and allow this experience to continue the way that it was. After a few phone calls, finally an appointment was made for a Neurologist in Melbourne to examine me, the results of his physical examination were that I was not suffering from Myofibrillar Myopathy. The relief that I experienced was palpable, I cannot describe to you the joy that I felt and the release of the anguish that I had built up over 2 years of living in a state of mis-diagnosis. The neurologist requested that I return as soon as possible to Melbourne to undergo examinations and tests overseen by a team of specialist doctors. Little did I realise that on the day of the appointment I was informed that the doctor would see me now and I was ushered through a door and into what seemed like a coliseum. The room was filled with over one hundred doctors, trainee doctors, specialists, neurologists, surgeons and the professor who had originally made my mis-diagnosis. Talk about confronting and intimidating, I was terrified. Questions after questions, stand up, sit down, explain my journey, it seemed to go on forever until a man on the right had side in the front row stood up and said I think I know what you are suffering from, “it is a disease called Pompe” and we can verify this by a simple blood spot test and with that stage 1 of my journey was complete. That uneasy feeling was gone, my diagnosis whilst still confronting and scary but authentic, it was accurate and was right.

I only have words, the Queens English to somehow give everybody who reads this short story an understanding of my journey, what I have probably not been able to clearly express was the amount of pain, anguish and the intensity of the suffering that was contained through this period of time that went on for a torturous two years.

To give you a further understanding of my journey I must share with you the pain associated with now understanding that my two older brothers who have both passed away with what we now believe had been the Juvenile Onset of Pompe Disease.

A lot has happened on my journey between when I started and where I now find myself. I am proud to be able to say that I am no longer scared, that I have developed, and that I have learnt. I’ve met dozens of whom I now call my “Pompe Family” from all over the world, I no longer feel alone and I cherish the friendships I have made through our Australian Pompe Association and through Facebook, even though we are all over the world, we can all communicate daily and share our experiences.
I live every day with passion and purpose, whether that be the hours I spend at work, or the time spent with my horses, or on the quad bike with my camera, hiking with my dogs or just spending quiet times with my husband.

Every day brings us a day closer to finding better treatments and helping to bring more awareness within our medical professions and community. Our Association is now working on New Born Screening becoming available in Australia, earlier diagnosis is paramount for a new baby’s survival and quality of life, I pray this day is not too far away.