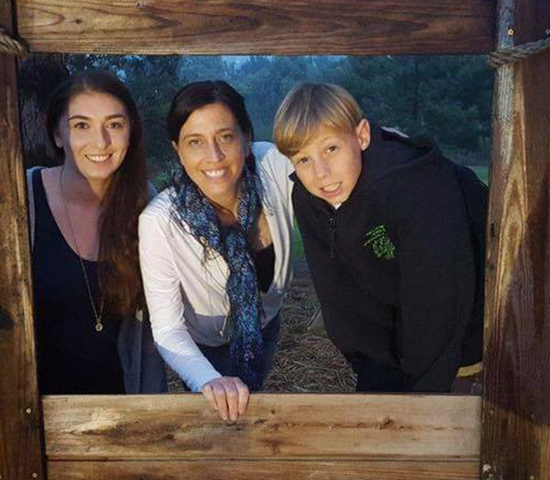 I am Catherine, a happily married mother of two, my daughter Jaime now a young adult and my son, Will, nine years younger. I have Pompe disease. Those who know me will remember a very normal girl growing up, who like many others was not very good at sport, pretty slow at running and maybe a little clumsy.

I have always been a very active person in general and in my 20’s and very early 30’s would go out dancing all night with friends. I fell pregnant in 2004 and very slowly things began to change. Toward the very end of my pregnancy I started to ‘waddle’ and had trouble going up a flight of stairs but thought this would pass after childbirth. When Will was born in June 2005, I struggled to pick him up from the ground and then by November, I couldn’t get out of a chair without using my arms.

“It was time to get help”

After many tests from Neurologists, I was misdiagnosed with Danon’s disease which has no treatment. I would become wheelchair dependent, followed by lung, kidney and heart failure and, of course, premature death. As you can imagine, this was a lot to take in. I was immediately put in contact with Physios, Occupational Therapists, Orthotics and disability permits were applied for. After researching Danon’s disease, I just kept saying it doesn’t fit. I don’t have it. But there was no other answer for the next 9 years. In this time I have lost a lot of muscle and my legs have become very wasted. Doctors often say they are surprised I am still standing with such muscle damage. I can no longer get up a footpath gutter, pick up a piece of paper of the floor (can you imagine how many $ notes I have let go after falling out my pocket) and suffer from falls with no warning. In 2012 my neurologist asked me to take a test for Pompe disease, a simple blood spot test. I goggled it first, found out that there was treatment to halt the progression and then prayed like mad in hope that I had it. I have it! 6 months later I was approved to go on Myozyme, enzyme replacement therapy, and I have enzyme infusions every 2 weeks that take around 5 hours.

“This has given me a new chance at a long life”

Already after 6 months, I had increased my walk tests, have had improvement in lung function and have much fewer falls than before. There are now around 50 friends just like me here in Australia that I can talk to regularly with the same struggles. I want to make sure you all know I live a very happy and full life. I am very involved with my children, family and friends and together with my husband Jason, run a successful confectionery manufacturing business.

Yes I have struggles, but I know many people do in all sorts of ways. The only thing I can honestly say I miss is being able to dance with my friends but with hope, you never know! I want to share my story with the world because I believe there are more Pompe People just like me that are still undiagnosed and a simple blood spot test may be the answer.